A woman who loses more than 150 hairs a day does suffer from female hair loss and should seek treatment.

Female hair loss is a major problem for women, regardless of age.

The most common ages for the onset of female hair loss are puberty, the postpartum period, and menopause. In all three cases, the psychological stress caused by female hair loss is intense, as hair has always been a crucial element of femininity and beauty.

The causes of female hair loss vary and may be either normal or pathological. Normal hair loss is a seasonal phenomenon that occurs mainly during autumn. It is estimated that all women will experience some degree of hair loss at some stage of their lives.

Diffuse alopecia is essentially due to a disruption of the normal evolution of the life cycle of hair, usually under the influence of some harmful agent. This causes ‛immature’ hairs to suddenly pass into the shedding phase; during this period, an overall thinning of the scalp is observed, with no specific areas of hair loss. It may affect hair growth over the entire body, but is usually restricted to the scalp.

Usually after a period of 3-4 months or when the effect of the harmful agent ceases to exist, the phenomenon subsides and the thinning is restored. It is often hard to diagnose, because the thinning is observed several (usually 3-4) months after the effect of the possible cause, which in most cases is no longer present in the patient at that time.

of hair in the Anagen phase

of hair in the Telogen phase

The clinical picture of this form of female hair loss is different than in men, as it is diffuse and rarely leads to baldness. Usually there is a predisposition, but it manifests itself only during menopause. The Ludwig scale ranks male pattern hair loss in women in stages, depending on its severity. One discerning feature is that in female hair loss, the frontal hairline is maintained and thinning occurs mainly at the crown of the head.

Lichen planus is the most common form of cicatricial hair loss in women. It is an autoimmune disease that affects the skin, the hair and the mucous membranes. It causes cicatricial alopecia which appears as smooth shiny patches, with hyperkeratosis around the opening of the follicle. Female hair loss of this type has a very poor aesthetic clinical picture, as there are scars, the hair is doll-like, and it is irreversible. It is treated with hydroxychloroquine, minoxidil and corticosteroids.

Hair loss in women due to discoid lupus is the second most common autoimmune form of cicatricial alopecia. It is caused by a disease called lupus erythematosus, which among others affects the skin and the scalp. Erythematous inflammatory patches, leaving atrophic scars with hair loss, are the main feature of this type of female hair loss. The diagnosis is made by biopsy and immunofluorescence, and the treatment of lupus that induced hair loss in women is done with steroids and immunosuppressants.

Alopecia areata is a common autoimmune cause for both male and female hair loss. It can be distinguished into monolocalularis (in one spot), multilocularis (in more spots), circumscribed, diffuse, ophiasis, total and universal. Often other autoimmune diseases coexist, such as thyroiditis. The diagnosis of this form is performed clinically or through biopsy.

Female hair loss of fungal aetiology is due to dermatophytes and various types of trichophyton. It is diagnosed by cultivation and treated with antifungals. Female hair loss due to microbial infections occurs in the form of folliculitis in the scalp. The little pustules may discharge pus and the region is led to scarring and hair loss. This does not occur only in women, but also in men and children and is treated with antibiotics. 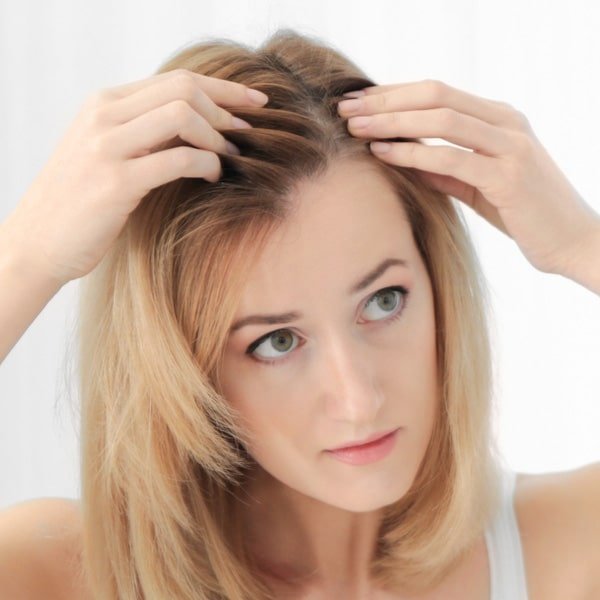 Diagnosis starts by taking the patient’s history, performing blood and hormonal tests, phototrichogram, or even with skin biopsy, depending on the type of hair loss. The prognosis depends on the type. Generally, the prognosis for diffuse hair loss in women of childbearing age is better than for men, as the female hormones act protectively. In case that female hair loss is due to underlying causes, the latter’s elimination leads to treatment e.g. with increased iron intake, improved diet, and avoidance of stress.

At Advanced Hair Clinics, each case of female hair loss is treated individually, starting with the correct diagnosis and resulting in the appropriate treatment that is different for everyone. Our clinic is one of the most specialised clinics in the treatment of female hair loss having extensive experience that counts thousands of cases in Greece and abroad, from Europe to the Middle East

Minoxodil (2%), an FDA approved medication for hair loss, rejuvenates and enhances blood flow around shrunken hair follicles, leading to their increase in size, and causing their thickening. Furthermore, it extends the growth phase of hair follicles and encourages hair regrowth. Minoxidil lotion is applied once or twice per day. It stimulates the local blood flow in the region that exhibits alopecia, resulting in the growth of hair. The main side effects are the irritation, erythema, oily hair and skin peeling, but they can be resolved once the dose is appropriately adjusted. Finasteride must be given only during menopause. It is an anti-androgen and it can be taken as follows: 1mg/day.

Hair transplantation offers an optimum solution to many cases of female hair loss. It is applied for androgenetic alopecia and other types of diffuse or cicatricial hair loss. Advanced Hair Clinics is specialised in clinical treatment of both male and female hair loss. The medical team of Advanced Hair Clinics applies FUE hair transplant method which leaves no scars, causes no pain, does not require stitches and gives a perfectly natural result.

In the majority of female hair loss restoration cases, Unshaven FUE method is applied. As the scalp is not shaved, there is no indication that the patient has undergone hair transplantation. The patient can return to her normal activities with no delay.

A total of almost 500 different DNA regions are being tested and analyzed, providing significant information regarding the underlying genetic predisposition to hair loss.

What are the causes of Female Hair Loss

The causes of female hair loss vary and may be either normal or pathological. Normal hair loss is a seasonal phenomenon that occurs mainly during autumn. Hair loss may also be due to hormonal reasons, such as:

What are the causes that lead to Diffuse Hair Loss?

Causes that lead to diffuse, i.e. the shedding and thinning of the hairs that is evenly distributed over the entire scalp, are:

What are the causes of Telogen Female Hair Loss?

Telogen hair loss in women is due to factors that cause the hairs to pass quickly into the telogen phase. Such factors may be:

What are the causes that lead to patchy Hair Loss in women?

The most common causes of patchy female hair loss, i.e. localised and not diffused, are: