FUT (Follicular Unit Transplant) or Strip hair transplant is an old hair transplant method that restores hair loss. It initiated in the 90’s and it spread quickly worldwide.

Thanks to the advancement in FUE technique it is possible the extraction of a large number of hair follicles - a fact that during the previous years was solely capable with FUT hair transplant method. This fact was actually the main advantage of FUT - Strip technique. 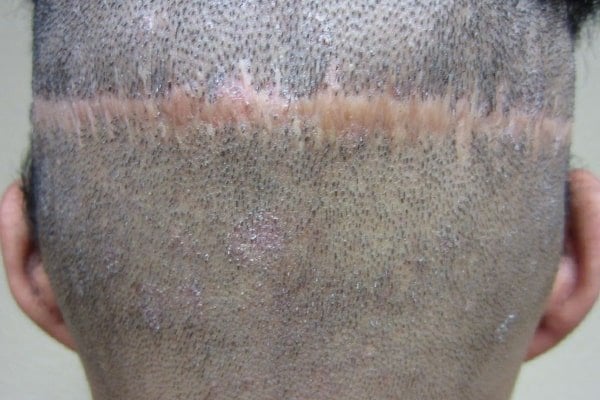 Moreover, when multiple FUT-Strip hair transplants take place, the probability of complications’ existence is significantly increased. An additional drawback of FUT technique is that due to the strip’s processing, the hair follicles are injured, thus the survival of the implanted follicles is limited. The creation of receptions intensifies the bleeding, the swelling and the pain post-operatively. Furthermore, the implantation of large-sized grafts leads to an unpleasant aesthetic result, the phenomenon known as doll-like effect.

FUT - Strip patients declare that they suffer as of:

Nowadays it is quite common patients who have undergone FUT-Strip hair transplant address specialised plastic surgeons so as to restore or eliminate the scars. It is essential to underline the fact that in Advanced Hair Clinics, a 35 - 40% of the patients that undergo an FUE hair transplant have experienced FUT hair transplant in the past.

Those patients trust Advanced Hair Clinics so as to increase hair density or in order to create a natural-looking hairline. Furthermore a 15 - 20% of the FUT hair transplant cases ask for restoration of the dysmorphic and apparent scars. Consequently, the application of FUT - Strip method has reduced internationally.

Have undergone FUT-Strip in the past

What are the stages that are being followed during a FUT - Strip transplant session?

The main stages regarding FUT- Strip hair transplant procedure are the following ones:

What kind of results can I expect after the completion of a FUT - Strip Hair Transplant?

The surgical team’s experience and skill set play a decisive role in the success rate of a FUT - Strip hair transplant. Those results can be excellent in terms of density. On the contrary, especially in the area of hairline, FUT - Strip method does not provide a natural-looking result as FUE method does. This happens mostly because FUT - Strip method leads to large-sized grafts that do not resemble with the natural, thin, one-haired follicles that originally exist in hairline.

Androgenic alopecia, being an evolving phenomenon, might necessitate a second, future hair transplant operation. In the case that a FUT - Strip hair transplant has been performed in the past, the application of a future operation might be a challenging action, because it should be created a second - parallel to the first - incision (double-cut incision) or an expansion of the existing incision, eventually worsening the already existing aesthetic issue.

How Much Does Your Hair Transplant Cost? Click here!
Book now Contact us Call us
Search for: