The modern hair transplantation technique, namely FUE technique, apart from its application in the definitive treatment of androgenetic alopecia, can also be used with great success in beard transplant.

Advanced FUE (Follicular Unit Extraction) is a technique for the transplantation of hair follicles, by which individual follicles are obtained one by one from the donor site – preferably in the occipital region (back and bottom of the scalp) – and transferred to the receptor site, where the beard thinning has occurred. Advanced FUE is considered today as the most modern method for beard transplantation, with the great advantage that it is minimally invasive and does not leave any marks or scars.

Beard transplantation areas include that of the chin, the moustache and its connection to the beard, the cheeks, the sideburns and any combination of these areas.

In comparison to other methods that are currently considered invasive and outdated (e.g. FUT or Strip), beard transplant performed with Advanced FUE technique presents the following advantages:

FUE Beard Transplant can be completed in 1 or, rarely, in 2 sessions, when facial hair loss is very big and density is an important requirement.

The facial hair transplant procedure is extremely demanding that is why only A FEW hair transplant clinics globally exist, with the vast experience and knowledge, as in Advanced Hair Clinics. 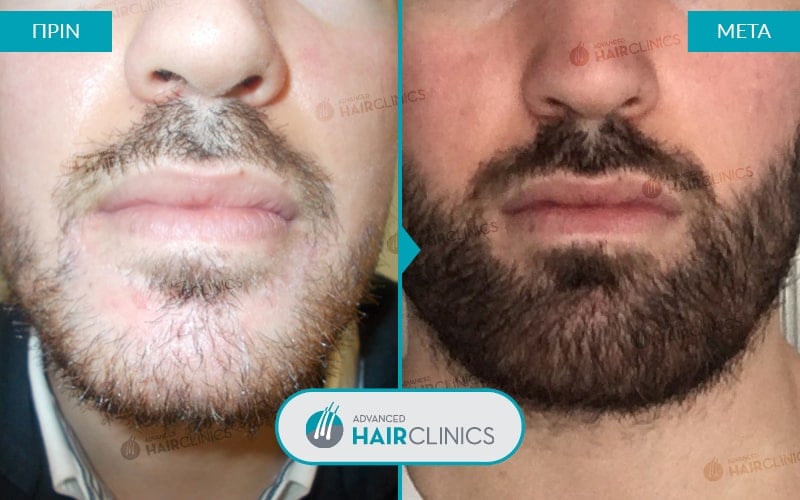 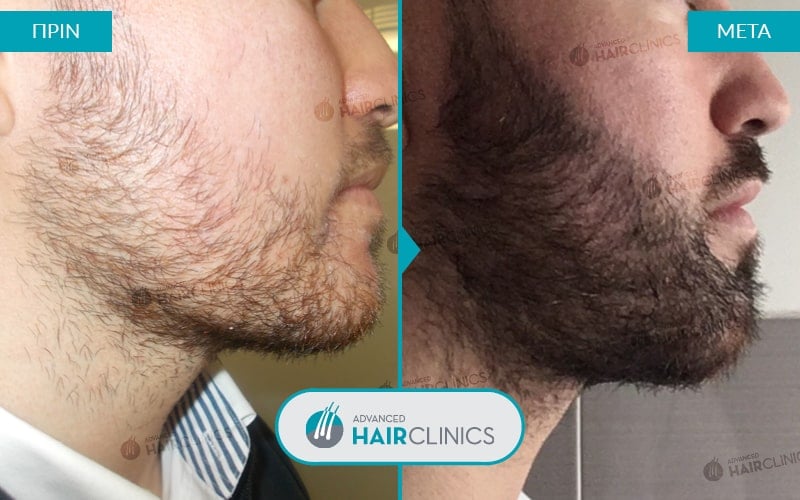 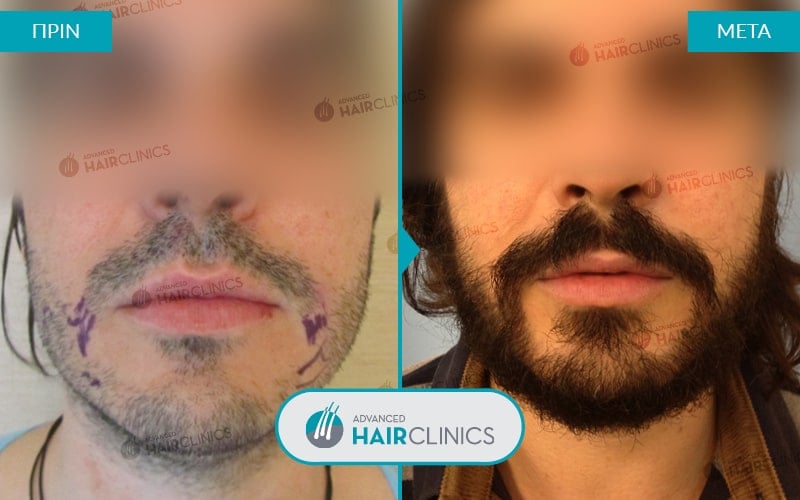 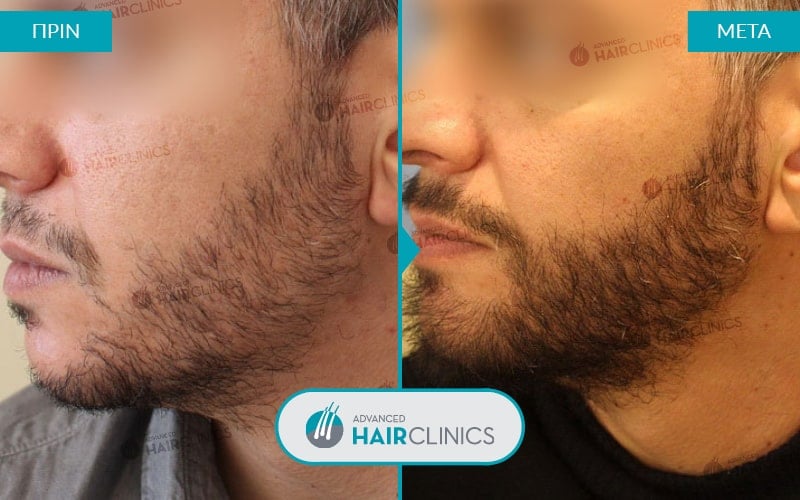 Who is the ideal candidate?

Beard transplant is indicated for those who have thin hair for hereditary or hormonal reasons (e.g. hypothyroidism), or due to an injury, burn or scar. All the above, indeed, are considered as the main causes of beard thinning. In many cases of mostly young men, sparse facial hair can be observed even if there is no heriditary factor.

In case of Alopecia Areata, can a beard transplantation take place?

Beard transplant can also be applied in selected cases of alopecia areata in the face or sideburns, if the damage is relatively small in diameter and has been stable for a period of more than one year. Beard transplantation can be performed in such cases, after the patient is informed that there is a likelihood of recurrence of alopecia areata in the same or another area of the face or scalp.

Which are the criteria that the doctor has to examine?

The way in which beard transplant is performed, needs to be designed carefully. More specifically, the doctor will examine a series of criteria, such as the age of the patient who wants to undergo the Advanced FUE beard transplantation, the hair density in the donor site on the head (or the chest, which may also be chosen as a donor site), the facial features, and the result that patient may expect. The doctor should also determine the number of hair follicles to be implanted, based on the clinical picture of the patient and the desired density.

Which are the stages of Beard Transplant?

Initially, the doctor determines and maps the donor site from which the hair follicles will be extracted. This should be a rich site that is not predisposed to thinning. Then, the specialist applies local anesthesia and removes the hair follicles one by one with a special device. The follicles are preserved in a suitable wet and cold environment, until the transplantation is performed. The doctor maps the area where the beard transplant will be performed. Finally, the specialist places the grafts with the Advanced FUE technique (one-step implantation) in the area where the thinning has occurred, without the need to open holes, which would harm and injure the area.

The implantation of the hair follicles in the receptor site is done with the aid of a special implanter device, which allows the positioning of each hair follicle not only at the proper depth but also under the correct angle and direction, as each area of the face (mustache, sideburns, beard, etc.) requires a different angle and direction in order to mimic the normal appearance of facial hair. Because of this extremely demanding process, there are only a few hair transplant clinics worldwide that have the knowledge and experience required for beard transplantation, one of which is Advanced Hair Clinics.

How is a natural-looking and dense result achieved?

During the implantation procedure of beard or facial hair in general, the peculiarities of facial hair need to be taken into account. In comparison to scalp hair, the hairs of the face are thicker, having approximately twice the diameter. Also, the face has mostly follicles with one single or two hairs. Follicles with more hairs are extremely rare. This means that during transplantation of hair from the scalp to the face with the FUE method, efforts should be made to obtain follicles that have hairs with as large possible a diameter, with single or double hairs mainly, which are usually taken from the occipital region.

It should also be noted that the transplantation of hairs to the face area, depending on the specific region (i.e. the beard, moustache, sideburns, cheeks or any combination thereof), requires substantial numbers of hair follicles in order to achieve a satisfactory result in terms of density. The number of follicles that are needed may vary from a few hundred in order to restore a scar or to enhance the density of the moustache or the sideburns, to several thousands in cases of total restoration of facial hair growth. By using the Advanced FUE method for beard transplant, the results look normal and it is natural-looking, and there are no linear scars or marks.

When will I see a complete result?

The rate of growth among the new hairs reaches 95%. After the beard implantation has been performed, the new hairs grow gradually, even from the first post-op days; a certain percentage of the hairs will fall out over the next 2-6 weeks after the transplantation and eventually grow back within the next 3-6 months.

The restoration proceeds gradually and because of the rich blood supply to the face, is completed by more than 80% within 6 months, while the final result is achieved after 1 year.

What is the cost of Beard Transplant?

The price for an Advanced FUE session of beard transplant varies, as it depends on the extent of the problem and the location of the affected area, namely whether it involves e.g. a small scar or a larger area, like moustache or sideburns transplantation, or full beard restoration.

Also, the cost is determined and increases proportionally to the duration of surgery and the choice of an unshaven FUE session, i.e. the possibility to undergo a beard transplantation without shaving the donor site.

Is the Robotic Hair Transplant a good option?

Because beard transplant and, more generally, implantation of facial hair requires follicles of special characteristics (single or dual hair, with a large shaft diameter), it is necessary to use suitable grafting tools that allow the selection of hair follicles with the desired specifications.

This is why manual extraction or motorised extraction is preferred. In this respect, the otherwise promising robotic hair transplantations (ARTAS) can present difficulty in use, because the machine operator cannot select the appropriate hair follicles.